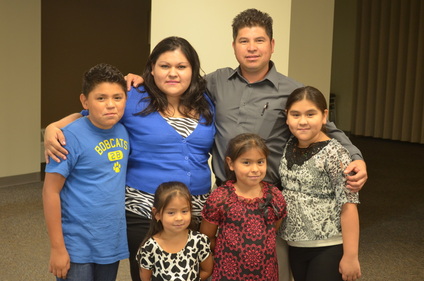 Max Villatoro, with his wife, Gloria, and their children Anthony, Edna, Angela, and Aileen.
We were honored to host Max Villatoro and family in our worship service on September 28, and to hear Max’s story of struggle as an immigrant to the United States.  Several people have asked questions about Max’s story, wanting to understand more fully what he has experienced. What follows is a summary of his story and an invitation to a compassionate response.

Max Villatoro was born and spent his early life in Honduras. His family was very poor with little money for anything other than the bare necessities.  Max had to go to the city to continue his education and had to work to pay for his education and his room and board while he was away from his family. Part of the time during his teen years he was not able to go to school because of a lack of money and the distance to the schools.

When he was 20 years old Max immigrated to the United States, crossing the border without being detected by the immigration authorities.  He has lived in the US since then.  In the 1990’s following the advice of immigrant peers he obtained a social security number in the black market to secure employment and to get a driver’s license.  These documents gave him the freedom to do what we as citizens take for granted.  Max now admits that this was a mistake and has had repercussions, including being caught by the authorities and charged with an aggravated misdemeanor for obtaining these documents illegally.  When first charged Max pleaded guilty, and was not represented by an attorney. He was fined, paid the fine, has gone on with his life and has had little to no incidents with the law since that time.

In 2000 Max became a Christian.  He dedicated his life to Christ and has been co-pastor of Torre Fuerte Mennonite Church for the last five years. To those that have worked with and know Max, he has been a devout Christian and an inspiration to them.

Max applied for a work permit in 2001, so he could support his family by legal means.  This triggered a review of Max’s record and the crime was found on it.  The Immigration Department wanted to immediately deport Max when they found this record because they felt that Max had a crime of “Poor Moral Turpitude” on his record and was not worthy of being in the United States.  There was no consideration of what Max had done since the incident, only what he had once done.

Max obtained legal counsel and has gone through a number of levels of courts with last appeal going to the Eighth Federal District Court in St. Louis in April of this year.  That ruling was passed down in August of this year and Max’s appeal was denied.  There is one other court appeal in the works, but this also has little chance of changing Max’s case.  Unfortunately judges can only look at the law and how the law is interpreted, not at how Max has lived his life since he has been in the U.S.

I believe that God has challenged us to look not at the mistake that Max once made but at the Christian witness that Max has been to us over the last five years.  I believe that Max should be given a chance to live with his wife and family in the U.S.  We are working on creating a letter to President Obama asking for pardon for Max and you are invited to sign your name to the letter as an act of Wild Hope on behalf of Max and his family. The letter will be sent to President Obama, The Honorable Tom Harkin, and the Honorable Charles Grassley.  We also ask that you continue to hold Max, Gloria, Anthony, Edna, Angela, and Aileen in your prayers.